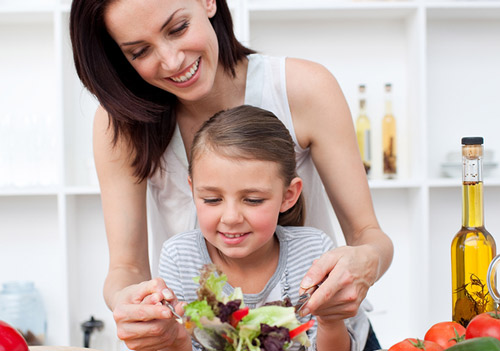 Recently an article came out about the scientific case for bribing your kids. Without going into details, the study was so flawed that it is not worth citing. In the writer’s defense, she did mention that there were over 130 studies on why not to bribe or reward children. More on that later.
So let’s talk about the topic of kids eating healthy and how can we get them to have lasting healthy eating habits. There are many myths passed on from generation to generation. And many parents experience power struggles about eating that damage the natural born intuition kids have about eating. Parents have been known to bribe with desserts if the meal is finished.
First of all, honest to goodness healthy eating is taught by modeling. Have good eating habits and they will transfer to your children in many ways. What children see us eating, our attitudes about food, and how we eat is vital to the guiding they need. Let’s look at some facts about kids healthy eating and habits.

Fact #1: Dr. Richard Mathis a Pediatric Gastroenterologist and nutritionist says developmentally, children do not get their adult taste buds until about age 11. After age 11 their taste buds open up and they will eat all kinds of food – i.e. Italian and Chinese etc.

Fact #2: Dr. Erik Sternlicht, Nutritionist Ph.D. and Professor at Chapman University in California, tells us that when a child is served a meal, all the foods should be on the plate. A dessert item should be on the plate as well. This way there is no preference given to dessert over other foods. Children will naturally eat bits of everything on their plate. If we dangle the reward of dessert when and if they eat so much other food, then the belief is passed on that dessert food is more important than the other food groups. He says that kid’s bodies intuitively know what they need. We as parents need to trust this process.

Fact #3: Studies show that 50% of kids are considered “picky eaters.” It is such a common trait in children, that it should be considered “normal” behavior to be selective about what they will put in their mouths.

Fact #4: It is evolutionary; young children were made to be finicky eaters for survival reasons. Way back in ancient times, children would be in the field or forest crawling around. If they put something into their mouths and it was a nasty taste they would spit it out as it was likely poisonous to them.

Fact #5: If children are bribed for something they will look for the next bribe or reward as an incentive to other new behaviors. They may even start to become manipulative back to you by using your own tactic and say, “What do I get if I do this or eat that?”

Fact #7: Some experts agree that it takes a parent 8-15 times to introduce a new food. The presentation needs to be in a calm, happy and loving way without ever forcing or bribing them.

Unfortunately, a majority of us were not raised with this style of parenting or good modeling. The old adage of, “Clean your plate,” “No dessert unless you finish your peas,” and “What about the starving children in China?” Can still be seen as the norm growing up in many American families today.
So be easy with your little ones as they enjoy the food they do and one day they will want to eat their yummy spinach and grow up to be strong!

About the Author: Ty Hatfield